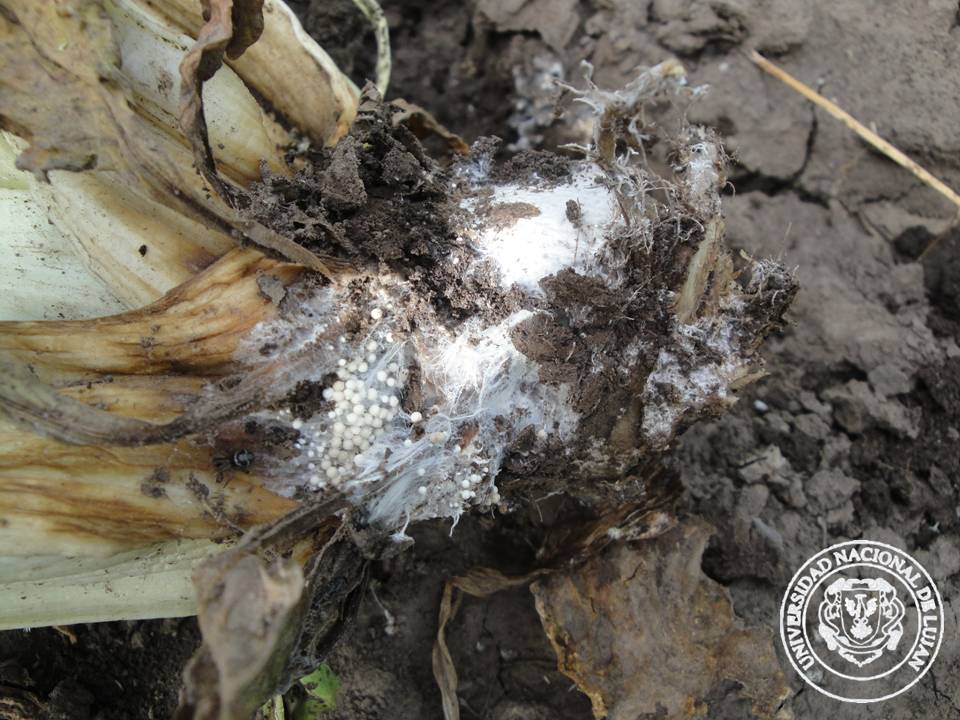 White rot of garlic in their symptoms are very similar to Fusarium rot, however it attacks the growing garlic more quickly and with more likely to destroy the whole plant. Stems white rot prefers cooler temperatures. Soaking planting material of garlic in hot water before planting can reduce the potential for white rot, but be careful — too high a temperature could kill the garlic.


In the world of White rot of onion family, is probably the most serious threat to the cultivation of onions and garlic. This is definitely one of the most important threats in most regions. Sometimes white rot ranks second after cervical rot of garlic (Botrytis allii), leaf spot (Botrytis squamosa) or downy mildew (Peronospora).

It is present in almost all producing regions of the onion. Some areas were able to continue production in spite of infection, but the disease was never fully eliminated. In some regions the disease was responsible for the complete collapse of the industry bulbous. 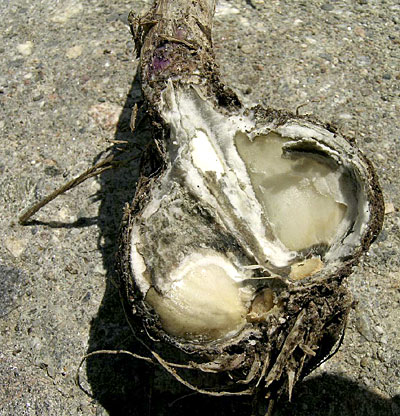 Allium white rot — the causative agent of this disease of garlic is the fungus Sclerotium cepivorum, or rather, his stage teleomorpha — Stromatinia cepivora.

White rot of garlic and onions 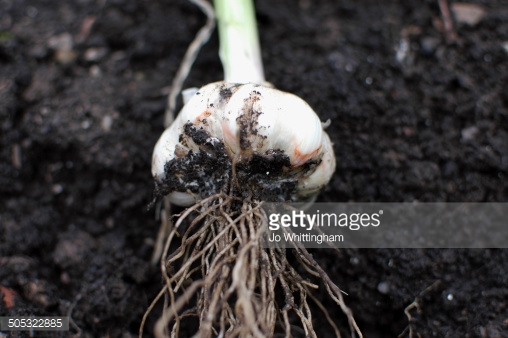 If the field is infested with white rot of garlic, it can take many years for its removal.

White rot of garlic is one of the most devastating fungal diseases that affect the onion family.

The causative agent of white rot of onion is not the same pathogen that affects many other crops such as beans, carrots, lettuce, tomatoes, peppers and more.

Infection of roots by the fungus occurs at a temperature of from 10 to 24 °C with an optimum of 18 °C depending on the region, the disease can occur from late spring to early autumn. At higher temperatures, the growth of the fungus slows down.

Sclerotium of the fungus release spores which then infect the roots and the surrounding follicles.

Sclerotium appears in mycelium and funguses are a form of preservation of funguses (the dormant stage that waits out for adverse conditions). They are able to survive in such form in the surface layers of the soil for over ten years. Until there are roots of the host plant and will not provoke the spread of the fungus.

It is believed that funguss react to the spread of onion in the soil sulfur. 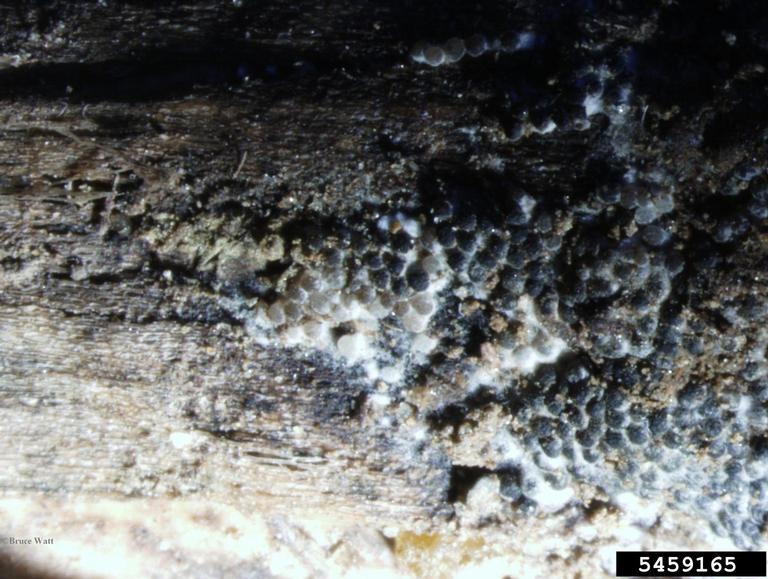 The symptoms of white rot the stems

Plants can be infected at any stage of growth. However, the first infection usually found in plants has from three to five leaves. The spread of the initial stages of infection is limited root system.

The first above-ground symptoms of infection include the yellowing of leaves starting from the tips and then moving down. There is a gradual yellowing and leaf death within a few days or weeks and in the case of young plants may experience rapid wilting and death of aerial parts. It’s not much different from many other issues of garlic, but white fluffy “grid” of funguss (mycelium) on the root end of the bulb, is the defining symptom.

In the underground part of the fungus is visible as a superficial, fluffy white mycelium. The roots are gradually destroyed and the fungus causes a soft, watery decay of the bulb, beginning with the stems. Also produces black spherical sclerotium (0.2 to 0.5 mm in diameter). They are formed on the bottom and inside decaying roots and stems.

Above-ground symptoms are not usually apparent until the pathogen colonized and partially not subjected to decay about the stem and the leaf axils. 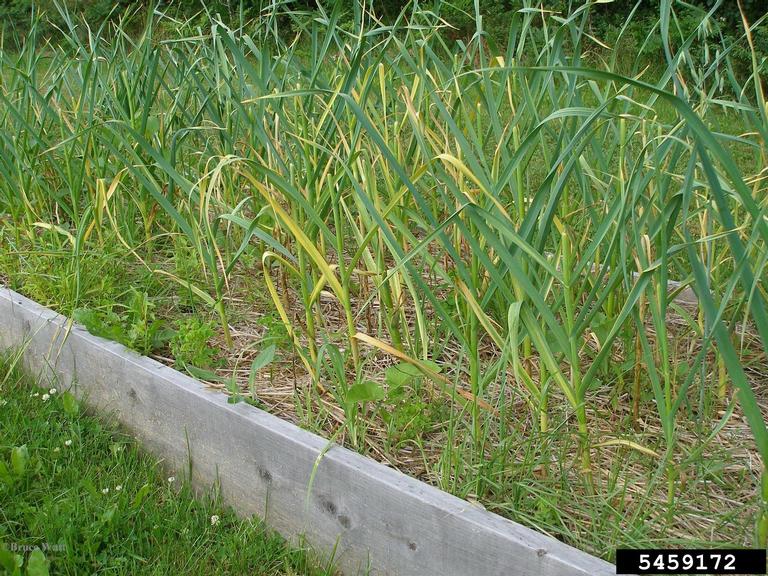 How does white rot of garlic

The disease agent is normally distributed:

Also, since the roots of garlic are often placed horizontally, it provides a direct way to move from one to another plant. Therefore, infected plants usually form a group of up to 40 or more adjacent plants.

That is, the foci of infection in the field may exist locally until the fungus will not be posted much further than from the root to the next, one of the above methods.

on the picture — the lesion on the field of white rot of garlic: 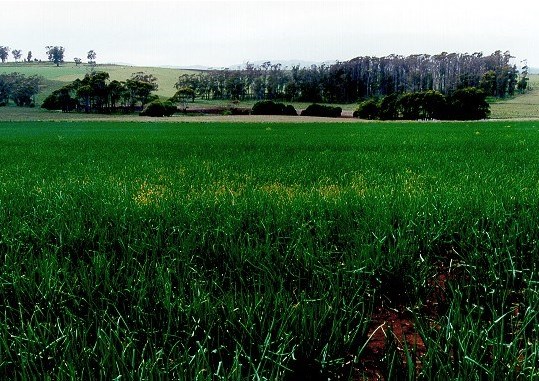 Prevention and control of occurrence of white rot of garlic

The best preventive measures are good sanitation. Use clean planting material of garlic, clean units and equipment. If the infection is not high, remove infected plants with dirt on roots and destroy them.

The fungus that causes white rot of garlic, can survive for many years as dry sclerotium on the surface of storage boxes and bins and harvesting and tillage equipment.

To ensure that the fungus does not spread all the possible surfaces that could be in contact with this disease, including shoes, disinfect with an appropriate disinfectant.

Equipment, storage silos, etc., shall be washed with high pressure, and then disinfected for ten minutes with sodium hypochlorite or calcium (such as 1:10 solution of household bleach). Then rinse with clean water. 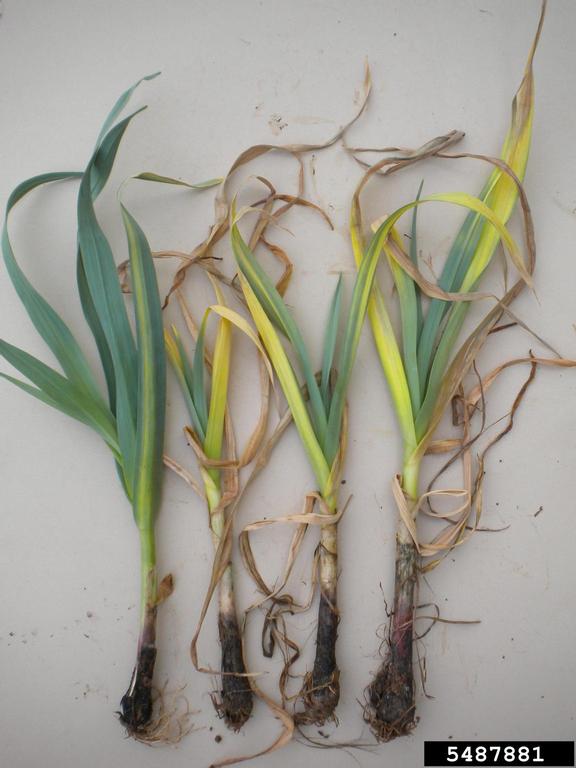 Encourage the development of mildew

Diallyl disulfide – organic substance derived from garlic and onions. When introduced into the soil it causes the growth of the sclerotium. That is, the fungus coming out of the “protective” stage, but can not find a suitable host plant. Therefore, hyphas of germinated sclerotium die which leads to a reduction in the density of the fungus Sclerotium cepivorum.

It is important to use stimulants of germination, when soil conditions are most favorable to Sclerotium cepivorum. The soil temperature should be above 9 °C with a sustained temperature above 27 ° C. 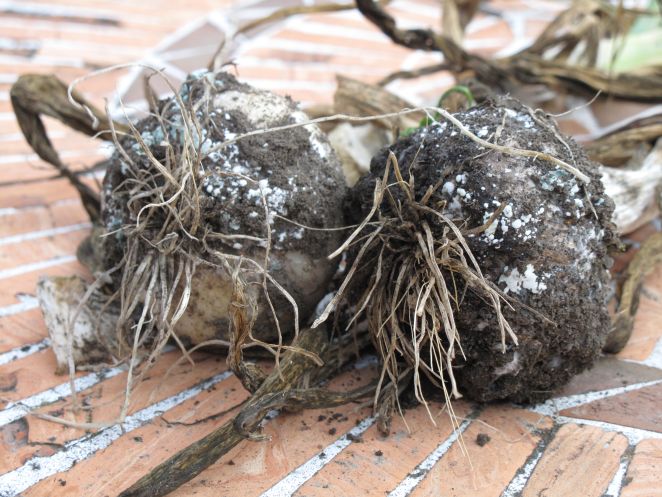 Heating of the soil may have a limited beneficial effect in a relatively cool climate. Some positive results were achieved in the experiment using this method.

The soil in the summer was covered with black tape which permit the sun’s radiation increased by raising the soil temperature to lethal to sclerotium levels. The exposure time of 4-6 weeks. 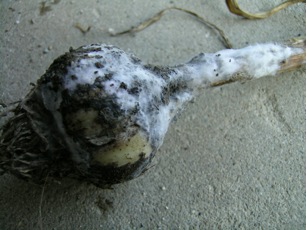 The use of certain fungicides is effective not only to inhibit germination of sclerotium, but also inhibits the growth of fungal mycelium.

For information, according to the established norms of use of 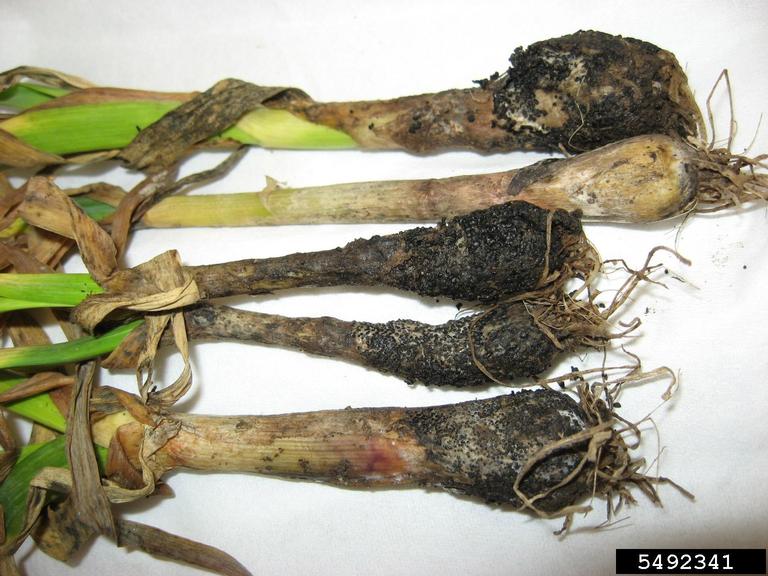 Steps in the preparation of planting material

During the growing season if there are signs of defeat

Video: activities for the field validation of garlic on the presence of plants with White rot, Nevada, USA