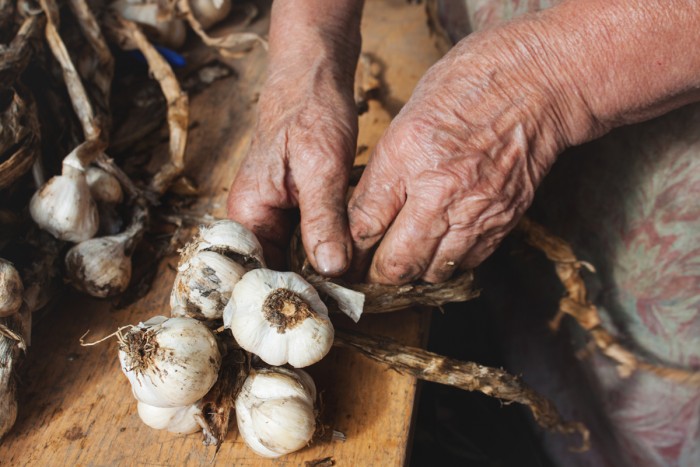 Depending on the region, the new season for Greek garlic is still gaining momentum.

With lower prices than last year, but more profitability per year,  the famous garlic from the region Nea Vyssa, where most of the local garlic is grown, is currently sold.

According to the President of the local agricultural cooperative of Tassos Yakmolidis(Τάσου Γιακμολίδη) from crops with an area of 3000 acres, in June the crop is harvested an average of 1,300 kg / acre, which is twice as much as last year. The price in June was 1.6 euros / kg last year – 1.8 -2 Euro/ kg.

“The demand for Greek garlic is, in particular, for a variety Visas (Βύσσας), which makes good commercial demand,” says Yakmolidis, noting that “this is why we don’t have much import. Maybe the imports were in small quantities, but it does not threaten the consumption or price of Greek garlic.” According to him, “There is a Greek garlic still. And this year, I think we will cover the needs of the local market until February-March. Imported garlic does not have … good luck, because consumers prefer the Greek garlic. The local garlic will be enough only a couple of months – April-May”. Most of the Greek garlic of this cooperative is sold on the domestic market, while a small percentage of 10% -15% is exported to Romania, Cyprus, Bulgaria and Germany.

Planting work began in October and ended in the first ten days of November with very few differences in terms of acres. High cost of cultivation of garlic (1,000-1,100 Euro / acre) do not encourage manufacturers to risk and increase their crops.

Garlic varieties Tripoli (Τρίπολης) also maintains a positive trend in the domestic market of the country.

In six villages in the region, more than 300 acres of this kind of garlic are grown. The harvest collected in June 2017 is already completely absorbed by the market. Productivity averaged 15,000 heads / acre. This year manufacturers faced the problem of fungus and rot. However, this did not affect the tendency to increase the cultivation, which in the past year and this year has a tendency to increase.

“This year the price may be slightly lower, but it still remains good, remaining correlated with other cultures, such as potatoes,” explains Giorgos Kotsiopoulos, chairman of the local association of cultural studies. Adding that this is one of the reasons for increasing the production of garlic. This trend is confirmed by an increase of 20-30% of the seeds that were transported through the Agricultural Association of Arkadia “The Union”. Finally, Mr. Kotsiopoulos was optimistic about the cooperative’s efforts to test organic farming. Organic garlic, he said, “is in great demand both in the domestic and foreign markets.”

The municipality of Platykampos, the region of Larissa.

The largest volume of garlic harvested this summer in this region is also completely absorbed by the local market. In comparison with last year, the crop volume has increased insignificantly.

So, in the season of 2016 the harvest increased by about 200-300 acres. The reason for this was a good price for it for producers, who added more crop areas.