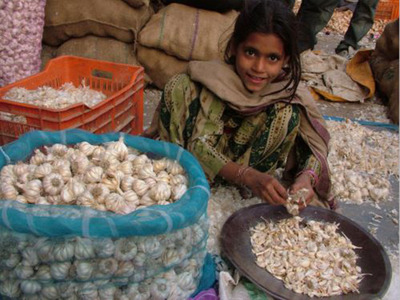 AHMEDABAD: Sowing of garlic in Gujarat has reached a record high jumping by 111% above the mean sowing area of 86,000 hectares (2011-16) tilled for garlic in the state. Farmers are taking to the crop as it is less water-intensive than other crops like cumin and coriander, and also because it has been fetching better prices riding on greater consumer demand.

The data released by the state agriculture department shows that increase in garlic sowing has affected sowing of both cumin and coriander in the state.

Officials says the maximum sowing of garlic was in the Saurashtra , including districts like Morbi, Rajkot Rajkot and Junagadh.

M A Vaddoria, a garlic research expert of Junagadh Agriculture University said: “Though the hotel industry consumes the largest quantity of raw garlic, domestic consumption has increased by around 15%. Also, the per hectare yield of garlic is far better than other crops, while the input costs of garlic farming are less.”

Vaddoria said the yield of garlic was around 7-10 tonnes per hectare.

Pravin Patel, CEO of a food processing unit said: “Garlic use has really picked up in the last five years. Besides changing lifestyle, garlic use is also being promoted as ayurvedic medicine. I personally feel domestic use of raw garlic has increased by around 10%.”

Mahesh Patel, secretary of Agriculture Produce Marketing Committee, Gondal, said: “The farmers prefer a crop which requires less water. Garlic is a crop which needs irrigation for only four times in a season, while other crops like cumin and coriander require irrigation for at least six to seven times.”

Farmers are also expecting that with more and more youngsters attracted to Chinese and Punjabi food, where garlic is an essential ingredient, the demand for garlic will continue to rise.