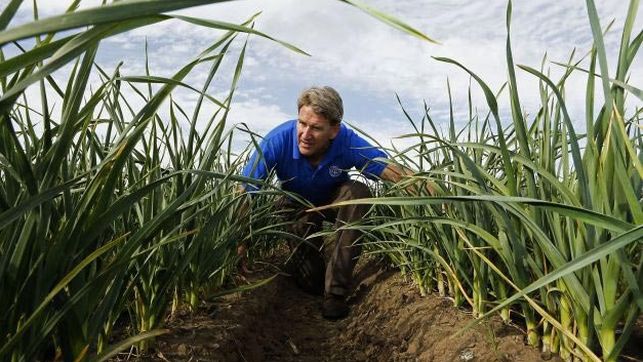 The crops of garlic in Castilla-La Mancha and the rest of Spain declined due to the drought. This is one of the main conclusions made by the Assembly to the National Bureau of garlic (La Mesa Nacional del Ajo), held in Las Pedroneras, Cuenca (Las Pedroñeras, Cuenca). Especially the drought has affected  the two main production region of Castilla – La Mancha and Andalusia, which also experienced a significant reduction in supply.

The representatives of Andalusia (Andalucía), Madrid (Madrid), Castile (Castilla), Leona (León), Extremadura (Extremadura) and Castilla-La Mancha (Castilla-la Mancha) , who attended the meeting, also assessed the level of stored garlic, and recorded the internal and external situation in the market.

The beginning of this season was named by the President of the National Bureau of garlic, Julio Bacete as “a shock, inclement weather and severe pressure on wholesale trade”, which ended with a good cycle from the previous two seasons. Manufacturers, without objective reasons, succumbed to the pressure of the market, going on about news from countries concerned about increasing harvest of lower prices in China and global implications of all this.

Last year, the prosperity of the sector has prompted many new farmers to cultivate garlic, but without the proper storage infrastructure, they lost not only their nerves, but also the crop, selling it at a low price, without any reason to do so. The damage is irreparable.

Fortunately, this wrong start of the campaign was corrected in the following months. At present, the warehouse prices for processed garlic are reduced by 15-20% compared to the previous season for the same dates, the price level is acceptable and is about €1800  / t for spring varieties and € 2,500 / t for the purple variety.

As of August, official statistics of the Ministry of agriculture and fisheries, food and the environment (Ministerio de Agricultura y Pesca, Alimentación y Medio Ambiente), presented at the meeting of the Assembly, the achievement of high record production figures in the last season- more than 260 000 tons of the crop with acreage of about 26 000 ha. The data presented indicate an increase in crops by 25% compared to the previous campaign and almost 30% of production.

The price Index of origin and destination of food products (IPOD)   was also analyzed, which shows an unjustified fall in prices in garlic in 2017. So, as of May, prices fell by 300%, while the product was not transferred to domestic consumption and the retail price was higher than € 5 / kg.

Spain in the international market

Until July 2017, according to COMEXT (the HTML interface that provides the Eurostat foreign trade database to the public), Spain’s exports to both EU countries and non-EU countries remained at a level similar to 2016. And the EU countries are the main customers of Spain, with average prices of € 2.40 / kg.

The role of China is unknown

With more than 3,000 million tons of garlic stored, China has not yet said its last word. However, its current presence in the European market is very weak. So, China, which is the main supplier for the EU, exported 18,000 tons this year. In 2016, the volume was 45,000 tons.

According to EUROSTAT, prices for imported garlic in the EU increased from an average of € 2 / kg to € 2.30 / kg. Egypt and Peru are allocated by volume, by July they have already surpassed the general indicator for 2016.

The National Bureau of Garlic has scheduled another meeting early next year in the city of Morata de Tajuña, in Madrid. At the meeting, as usual, a rough estimate of the forecasts of the next campaign and the evolution of the market will be made.