Review of the world market of garlic 2017 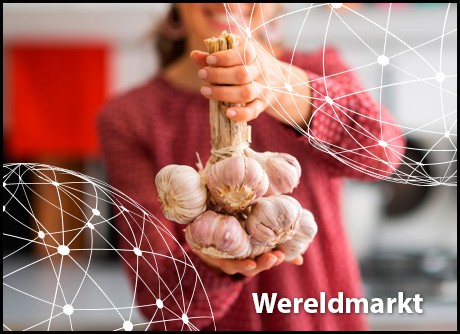 After China experienced a difficult season last year and the production was lower, many countries saw their chance to increase their market share. This year China came back with a large volume and is claiming its place on the world market again. These brands include the exporters in Peru. Other countries see opportunities in garlic cultivation, there are growers in Dominican Republic and Ukraine who step into garlic cultivation.

The garlic stock is at 348,000 tons this year, an increase of almost 78% compared to the 196,000 tons that was in storage a year earlier. Last year, the acreage increased, so the harvest almost doubled this year. This increased supply was reflected in the export price of garlic, which is about 6,000 yuan (770 euros) per ton. In the same period last year the price was  10,000 yuan per ton, a difference of 40% with the current situation. In total, no more than 2.4 million tons of garlic are marketed. There is still room for 1 million tons in storage.

The cultivation can be found in the middle and north of the country. At the wholesale market in Mandsaur district more than 800 tons of garlic is traded during the peak of the season. However, most of the production remains within the country’s borders, some 10% is destined for export. The demand is limited and the competition with Chinese garlic is difficult.

Until recently, little garlic was grown commercially in Australia. The harvest starts at the end of spring and continues during the summer. Approximately 80% of the garlic is imported. Most of the garlic comes from China, but the supply from Spain, Argentina, Mexico and the US is also increasing. We are working on a plan to increase domestic production in order to be able to fulfill 30% of the demand.

Now that the Argentinian export season is starting, the Peruvian exporters seem to be increasing the pressure on the American market. “I have had several requests from Peruvian growers and traders,” said a US importer. The company imports garlic from Argentina. How the market will develop is still uncertain. “We do not expect prices to be so high in 2018, but we anticipate a stable price.”

The garlic market is currently difficult in the Netherlands. Because with the current prices everyone is able to purchase a container of garlic, the market is divided over too many importers, while they often only need a few pallets per week. This makes the situation unclear, although you can not blame anyone for it. The prices of the garlic are far apart. The harvests in both China and Spain have been very good and in China even the greatest harvest ever is mentioned. In fact, all producing countries have planted more in the past year. Importers expect that the market is likely to stabilize or slow down, given the stock and bad demand to date. They are certain that if there is no more demand, the price will definitely fall further after the Chinese New Year.

The Spanish harvest was 20% higher than last year. Prices have been stable since July when the harvest ended. The demand is good and according to traders there is enough market for the Spanish garlic. This is also due to the new markets that were tapped last year despite the competition from China. The prices were low last year, but the year went down in the books as a record year. At the moment the prices are profitable.

Growers are currently planting the spring garlic for the next season. The climate is favorable, although growers fear drought. It is too early to be able to say anything about the upcoming season, but it seems that the area will be slightly lower next year. The planting of the new garlic continues until February.

Although retailers support domestic garlic cultivation, production is insufficient to meet the demand. “The volumes are good and the yield (dry weight) is 10 to 12 tonnes per hectare, the dry season has no effect on production and we have tackled the fusarium problems well,” said a trader. The import garlic is usually cheaper than domestic cultivation. Most retailers have an eye for the country of origin when buying.

The market is not easy due to competition from Spain. On top of that come the problems with fusarium, which affected the crop this season. However, the volume is stable, although good sorting is required. The Spanish garlic goes for less than 0.50 euros per kilo of the hand. Consumers are more interested in the price than in the country of origin. The white garlic is the most popular. Both imports and exports are growing. Imports include Spain and China. For example, export goes to Switzerland, Germany, Belgium and Austria.

The growers have been planting for two weeks. The conditions for this are currently good. The previous season had a good volume and good quality. As a result, it is currently still being sold from storage. Prices are normal and the focus is on the domestic market. The price for category 6 is currently between 2.50 and 2.70 euros per kilo. Until November there is little import product present, most consumers opt for the Greek garlic. After Christmas there is more room for Spanish and Chinese garlic. Egyptian production will be on the market from April.

More and more growers see bread in garlic cultivation. Although the production is still small, growers see a great potential in this cultivation. Much has been invested in technological progress, which has increased production and opened up new markets. More than 200,000 tons have been harvested this season. Domestic cultivation provides 90% of the local market. In the months of February to May is imported from China. Belarus is a historic export market for garlic, but the Baltic states are also buying the product. In recent years much has changed with tests to the Netherlands, Canada and other EU countries. This urge for export is also motivated by the low price of 1 euro per kilo for fresh garlic.

Peru is looking for opportunities

It is a difficult season compared to last year. “Last year the market was good for sizes 5 and 6, but because China has large volumes this year, we only get requests for sizes 7 and 8,” says a trader. A solution to this problem was found in the marketing of the small calibres in a net packaging in the USA. The harvest of the purple garlic is waiting for the door. There is room in the Australian market for the large sizes of this garlic. “We have high expectations for the export season of the purple garlic, so it should compensate for the season of the white garlic.”

Production is growing by 14% compared to the previous year, according to figures published by the government. In recent seasons, this cultivation has experienced stable growth. In 2016, garlic cultivation had a share of 64% in the area, this year it rose to 73%. This means that the production is estimated at 130,000 tons. The largest part, 74%, is destined for export, the rest is sold on the domestic market. The most important market is Brazil, accounting for 34% of exports. More than half of the planting consists of purple garlic, 34% is red garlic, 6% white and 5% other species.

For the plantings of this year a larger volume is expected than last year. Growers are motivated by the profitability of the product and they hope that the government will stop the import if local product is on the market. Dryers have also been installed to speed up the process after the harvest. “We estimate that 4000 tons are harvested, which is enough to meet the demand of two months.”