HomeDiseases of garlic Rust of the garlic. Photos, description, how to control

Rust of the garlic. Photos, description, how to control 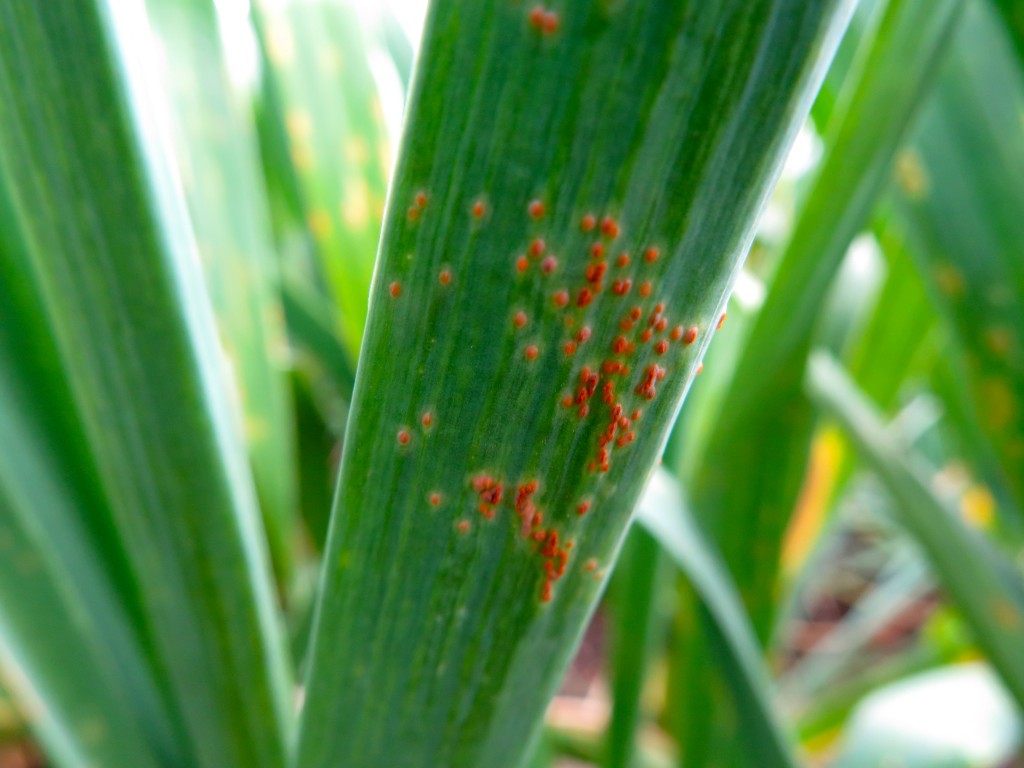 Rust of the garlic it is a disease which is the causative agent of rust fungi Puccinia alli (synonym Puccinia porni). Also rust impressive onions, leeks, bunching onion.

Signs emergence of diseases such as garlic rust accurately determined. The disease affects the leaves:

The effects of garlic rust infection

Rust of the garlic does not directly lead to the death of plants but damage caused by leaves reducing their ability to convert sunlight into energy, leading to slower growth and opening plants to other infections.

Heavily infected leaves turn yellow and may prematurely dry out.

When the infection spreads much plant, the size of the bulbs and its quality is declining.

Garlic cloves affected by rust are edible. Also study conducted by the University of California found that planting garlic, taken from infected plants rust, rust is not a new crop. Just choose the biggest cloves of bulbs and can be planted next season.

However, significant losses were recorded rust of the garlic. In 1998 plague outbreak seriously injured garlic harvest in California. Economic damage was estimated at 27% losses. Perhaps this was due to get small, non-tradable heads of garlic.

Below the photo is a comparison of healthy heads of garlic with only a slight rust damage that occurred in mid-spring (left) compared to garlic, which was badly infected since the winter (right). Teeth were healthy and are no different (except for size). Photos and description from the site gardenbetty.com 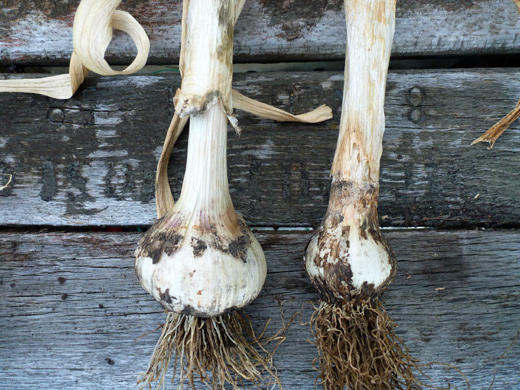 Understanding the life cycle of the disease can significantly help prevent it. The most important factor in the life cycle of garlic rust is that the fungus pathogen can live on dead plants. This is the key to control it from one year to another.

Spores of the fungus (Puccinia allii) move in the wind and rain water because of an infection in one field can affect the garlic or onions in another part.

From mid-spring to early summer

When the temperature begins to rise, the spores of the fungus Puccinia alli released from infected live plants and affect other plants. The ideal temperature range for the release of the dispute and germination from 10 ° C to 20 ° C, although they will grow and outside these ranges.

From early summer to late autumn

When a dispute reaches the plant, they germinate. Rust fungi infect new plant and begin to feed on it. The time between the appearance and the impression disputes visible signs of infection may last from a week to a month. It depends on temperature and humidity.

It is important to understand that the infected plants do not always show immediate signs of infection. The infection spreads easily from one plant to another part (and to neighboring plants) during the summer and fall.

In winter, when the temperature falls, the rate of infection is slowing, fungus overwinters on plant debris (self-seeding ladder), as well as multi kinds of onions (Welsh onion, leeks) 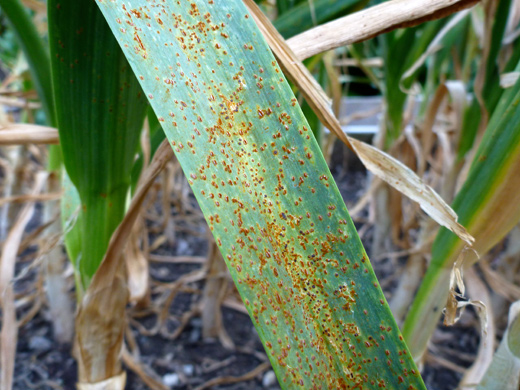 How to deal with scum garlic

Information about the availability of resistant varieties of garlic rust until it is detected. 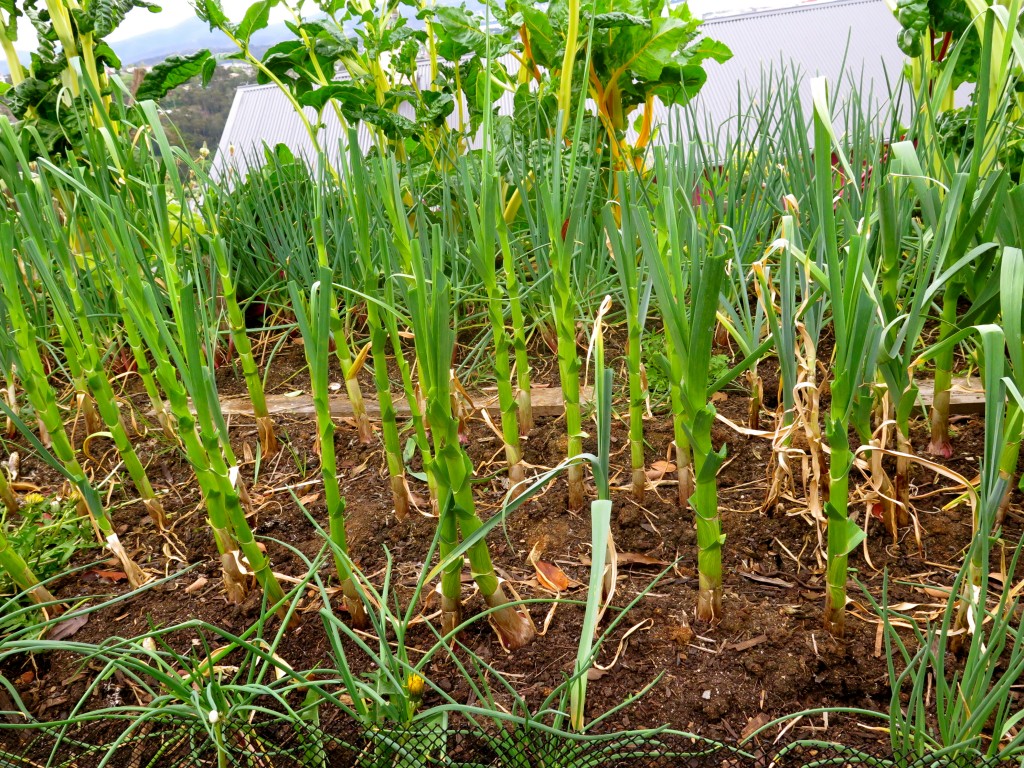 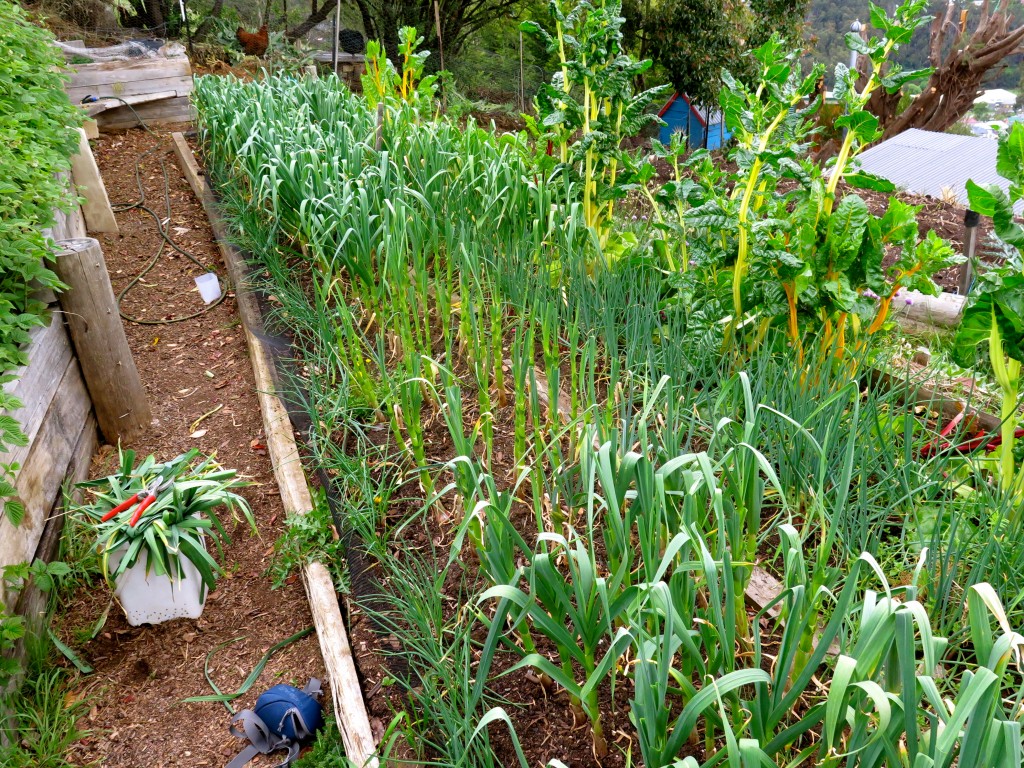 Tests fungicides for 3 years, was conducted with the above the University of California showed that none of the approved active substances showed no lasting results.

Photos and descriptions of some of the sites:

The information was prepared by  – Andrew Marchenko