HomeБез рубрики Uncategorized Garlic in Spain Spain: “We have been forced to delay the marketing of garlic”

Spain: “We have been forced to delay the marketing of garlic” 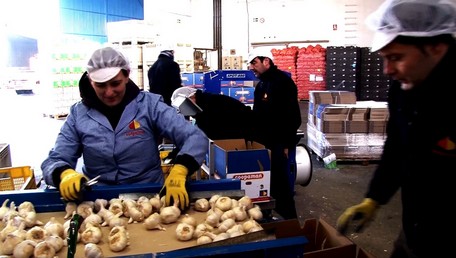 The Spanish garlic campaign kicked off a few weeks ago with the marketing of the first Spring and Spring violet garlic, and now preparations are underway for the harvest of purple garlic, which is the most representative in Spain because of its organoleptic properties.

In any case, “it remains to be seen if the crops will be affected by hail or heavy rains, as well as by higher temperatures than average. We will have to wait a few days to see how things develop,” explains Rafael Polo, commercial director of Coopaman.

The start of the campaign for the sector as a whole has been characterised by a noteworthy drop in sales, which has been caused by the nervousness of some growers, who fear a premature fall of prices. This has brought prices down below the average of last year.
According to Rafael Polo, “the fact that the two previous campaigns have been so good for garlic producers has attracted many small and medium-sized growers to venture into the cultivation of garlic. Seeing how Chinese garlic prices have been declining in recent months, given that more production is expected, those growers have tried selling their crops quickly. Some of them have sold their garlic at very low prices. It is incomprehensible, since there were no stocks available and the international market was relatively empty.”
In view of this situation, Coopaman has been forced to delay its sales. “We have hardly marketed any goods in the month of June. We have preferred to wait until the small producers stopped selling and now sales are going smoothly. We are currently delivering about 30 containers per week,” explains Rafael Polo. “Now the market is more stable and there is a greater balance between supply and demand,” he adds. 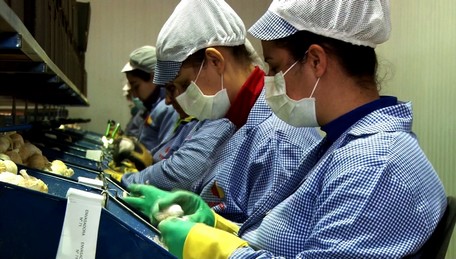 While Europe has always been the most important export destination for this company (and where, in fact, its customer base continues to grow), third markets are becoming increasingly important.
“Our garlic shipments to Brazil are on the rise and we are sending between 10 and 15 containers per week. Brazil is the world’s second largest consumer of garlic, with around 400 million kilos per year. They are only able to cover 60% of the market demand with their own production, so the rest needs to be imported. It should be noted that the United States is also increasing its orders,” affirms Rafael Polo.
Coopaman markets its garlic under the brand Pedroñete and this year will launch its new brand Ajoman.
“We will select only the best quality for this brand, which will be sold with the label of the PGI Ajo Morado de las Pedroñeras. We believe it will be a very marketable brand, just like the Pedroñete. The first tests, both at national and international level, will be carried out in August.”