The influence of macronutrients on the cultivation of garlic 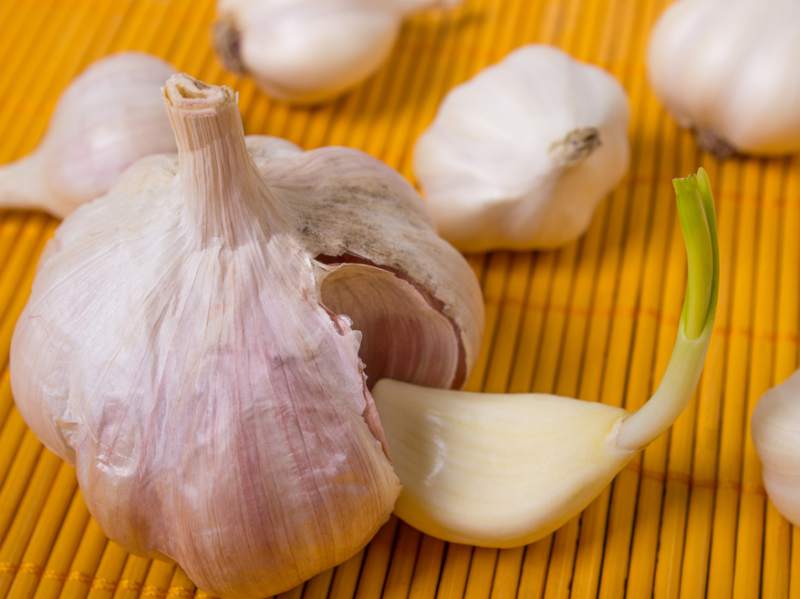 It is part of proteins, enzymes, nucleic acids, chlorophyll, vitamins, alkaloids. It is especially necessary in the initial periods.

The deficiency symptoms of nitrogen and its effects

When the nitrogen content is insufficient, the leaves wilt, acquiring a pale green or yellow-green color, the plants become tough, with short narrow leaves. In the future, the top of the old leaves of the plant dry out. Often a shortage of nitrogen appears at low temperatures and excessive moisture. Signs of a lack of nitrogen appear first on the lower leaves.

Nutrition should be stopped in the middle of the vegetation, otherwise there will be storage problems.


The dose of nitrogen fertilizers

Agrochemical analysis of soil and / or leaf diagnostics are the basis for determining the standards and period of nitrogen fertilizer.

The role of phosphorus

It plays an important role in energy metabolism, accelerates the formation of bulbs, increases the resistance of plants to low temperatures, promotes the development of the root system.

Symptoms of phosphorus deficiency and the impact of this deficit

Signs of starvation may occur at early stages of plant development, when they have a poorly developed root system and is not able to absorb sparingly soluble phosphate. Lack of phosphorus may occur in soils with low (<5,5) and high (>7.8) to pH, as well as cold wet soils and on poorly drained and clay soils.

The leaves have become variegated. Necrosis moves from top to the bottom of the leaf.

The exchange of energy and substances in plants and the formation of reproductive organs are disrupted with a lack of phosphorus. Development is inhibited and maturation is delayed. The harvest decreases and its quality deteriorate.

The greatest need for phosphorus – the phase of 2 leaves – the beginning of the formation of the bulb.

The norm of phosphorus fertilizers

Agrochemical analysis of soil and / or leaf diagnostics are the basis for determining the standards and period of nitrogen fertilizer.

The role of potassium in a plant

Participates in the processes of synthesis and outflow of carbohydrates in plants, determines the water-retaining capacity of cells and materials, affects the resistance of plants to unfavorable environmental conditions and the disease affection, and increases the shelf-life of bulbs during storage.

Symptoms of potassium deficiency and its consequences

Potassium easily passes into unavailable for plants condition. When moistening, and then drying the soil, the fixation of potassium increases. Therefore, the lack of potassium is felt when heavy rains and watering, alternating with drying of the soil.

External signs of a lack of potassium are manifested in light yellowing of old leaves, their tips twist and die. The edges and tips of the leaves become a “burned” appearance, small rusty specks appear on the plates.

The greatest need for potassium (in garlic and onions) it is from the beginning of the formation of the bulb and before harvesting. This is especially important for varieties intended for long-term storage.

The dose of potassium fertilizers

Agrochemical analysis of soil and / or leaf diagnostics is the basis for determining the rate and period of application of potassium fertilizers.

Influence of micronutrients on the crop

It is part of chlorophyll, phytic acid, participates in the movement of phosphorus in plants and carbohydrate metabolism and affects the activity of oxidation-reduction processes. It is consumed throughout the season.

The lack of magnesium is most often seen in acidic sandy and sandy loamy soils with imbalance of fertilizers and on soils with low magnesium content.

If there is insufficient magnesium, leaves take a mottled color (leaf veins green, the leaf blade is yellow).

Plants lag behind in growth and form small bulbs.

Agrochemical soil analysis and / leaf   diagnostics are the basis for determining the standard and the period of fertilizing plants with magnesium.

Calcium plays an important role in photosynthesis, in the movement of carbohydrates, in the processes of nitrogen assimilation by plants. Involved in the formation of cell membranes, makes watering and maintain the structure of cellular organelles. It is affects the duration and quality of storage. The maximum consumption is from the beginning of bulb formation.

Lack of calcium in the plant is observed in acidic soils, with an imbalance of nutrients, with drought.

The root growth slows down, root hairs are not formed and the roots fform mucus and rot.

The growth of leaves is inhibited, they develop a chlorosis spot and then they turn yellow and die prematurely.

Not re-used – indications of calcium deficiency are manifested primarily on young leaves.

The highest consumption of calcium plant (garlic) – with a phase of 5-7 leaves.

The norm of fertilizers containing calcium

Agrochemical soil analysis and leaf diagnostics are the basis for determining the standards and the period of fertilizing plants with calcium-containing preparations.

Sulfur is involved in the metabolism and transport of substances in the general processes of ionic equilibrium in plant cells. It is part of the protein, being one of the initial products for the biosynthesis of amino acids.

It is affects the taste and aroma of garlic, onions.

Lack of sulfur leads to the fact that young leaves get a color from light green to yellow-green.

With a lack of sulfur, the leaves sometimes become deformed; ribs of a dark green color appear on them.

Later the new leaves completely dry from the top to the bottom. On old leaves necrosis reaches the middle of the leaf, the color turns to straw.

The greatest consumption of sulfur occurs with intensive bulb growth

The norm of fertilizers containing sulfur

Agrochemical analysis of the soil and / or leaf diagnostics is the basis for determining the norm and the period of fertilization of plants with preparations containing sulfur.

The role of copper

Copper affects the exchange of energy and substances in plants. It controls the synthesis of tryptophan (auxin precursor), It participates in the metabolism of starch and nitrogen. Activating the enzyme, which prevents the destruction of plant cells. It is participates in the lignifications of cell walls. Affects the formation of dry scales

The lack of copper can be manifested on soils with a high content of organic matter and high nitrogen content.

The highest consumption of copper by the plant (garlic) is in the phase of 5-6 leaves.

Agrochemical soil analysis and / or leaf diagnostics are the basis for determining the norm and the period of fertilizing plants with preparations containing copper.

The role of manganese in the plant

It is catalyst of oxidation-reduction reactions in plant material. Manganese is important in the formation of chlorophyll, takes part in breathing. The maximum consumption starts from the moment of bulb formation.

Symptoms of manganese deficiency in the plant

A deficiency of manganese can occur on soils with a high pH (> 7.8-8), on loose (fluffy) soils, after liming, make high rates of manure, dry soils and in cold weather conditions.

With a shortage of manganese on the leaves appears interveinal chlorosis. The leaves turn yellow. Plants grow slowly, the development of the bulb slows down, and thick necks form.

Manganese is needed throughout the growing season.

Agrochemical analysis of the soil and / or leaf diagnostics is the basis for determining the norm and the period of fertilizing plants with preparations containing manganese.

The role of boron in a plant

Boron has a big impact on carbohydrate, protein and nucleic acid metabolism, and a number of other biochemical processes in plants.

Has a great influence on the growth of roots and young leaves, on the quality and quantity of the crop. It is necessary throughout the growing season.

Symptoms of Boron deficiency in a plant

With a lack of boron, plants begin to lag behind in growth. The color of the leaves varies from dark green to blue-green. Leaves twist thicken and become brittle. On the tops of young leaves, necrosis is formed, which quickly progresses – the leaf wilts for several days. With a long deficit, the symptoms appear on old leaves, leading to the death of the plant. If deficit decreases, keeping quality after harvesting.

The beginning of intensive growth.

The rate of fertilizers containing Boron

Agrochemical analysis of the soil and / or leaf diagnostics, are the basis for determining the norm and the period of fertilizing plants with preparations containing Boron.

The role of Zinc in the plant

Zinc affects the exchange of energy and substances in plants. It controls the synthesis of tryptophan (auxin precursor). It participates in the metabolism of starch and nitrogen. It is activating the enzyme which prevents the destruction of plant cells.

It is most important at the initial stages of development.

Symptoms of zinc deficiency in the plant

With shortage of Zinc plants begin to lag behind in growth. Young leaves are deformed and sometimes they are curved, there are chlorine spots.

Agrochemical soil analysis and / or tissue (leaf) diagnostics are the basis for determining the norm and the period of fertilizing plants with preparations containing Zinc.

The Role of Iron in a Plant

Iron is involved in the synthesis of chlorophyll. Regulates the processes of oxidation and rehabilitation of basic organic compounds in plants, takes an important role in breathing. It is participates in the synthesis of auxins. The need is throughout the entire growing season.

Symptoms of a lack of iron

Iron deficiency can occur on soils with a high pH (7.8-8), carbonate and high in phosphorus when irrigation water with high pH and/or high in calcium.

When there is a shortage of iron, yellowish veins appear at the base of the young leaves. Over time, veins appear on older leaves.

The leaves become more vertical. With a strong deficit, all the leaves acquire a light-straw color (whitish), beginning with the tips and dropping down. The spots have, in contrast to the deficiency of other elements, a velvety texture.

Iron is necessary throughout the growing season.

The dose of iron-containing fertilizers.

Based on the results of agrochemical soil analysis and / or leaf diagnostics.

The iron deficiency is mainly observed in the southern regions on calcareous soils.

The role of Molybdenum in a plant

The microelement of molybdenum promotes the synthesis and exchange of proteins, recovery of nitrate nitrogen.

The lack of molybdenum is often seen in acidic, sandy and low in organic matter soils.

With a shortage of molybdenum on old leaves, necrosis is formed; the leaves become pale yellow, similar to potassium deficiency.

Over time, at the ends of all leaves necrosis is formed, they become light yellow – similar to nitrogen deficiency.

The dose of molybdenum fertilizers

Agrochemical analysis of soil and / or leaf diagnostics is the basis for determining the dose and the period of application of molybdenum fertilizers.

Since the beginning of active growth.